Italy For Beginners: Part Due 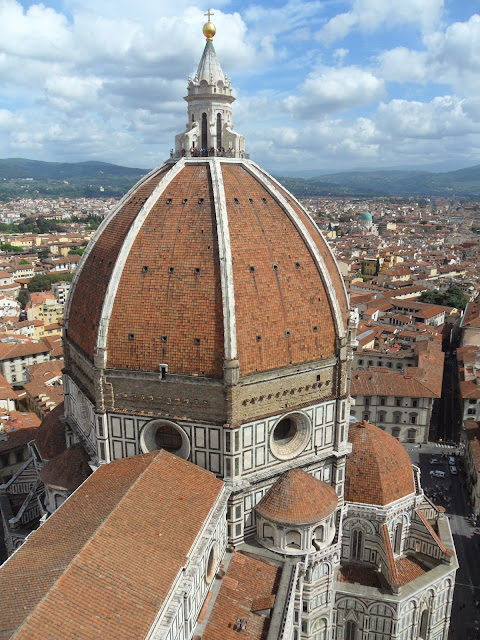 The Florence skyline is dominated by the "Duomo", a beautiful domed cathedral that solidly fills the square like the king of the city. 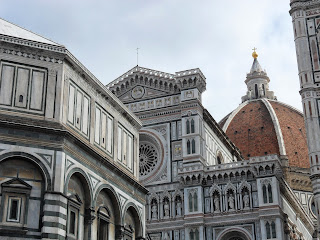 The outside walls have a green and white tiled pattern that is dizzily intricate and symmetrical. 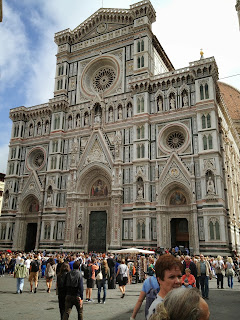 Crowds gather early to tour the cathedral, and another line snakes around a side entrance to climb the millions (ok, hundreds) of steps up to the dome.  My husband Mark and I, along with our friend, Keith got in line fairly early and began to climb.  Carol, who is a wee bit clautrophobic, wisely stayed out of the narrow and airless stairwells. 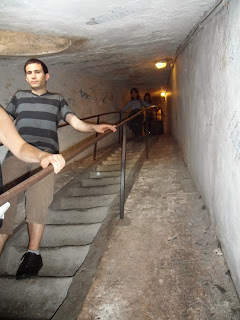 I must admit, I got a bit panicked when the crowds coming down from the top met the crowd coming up.  I thought, "Haven't these Italians ever heard of walkie talkies?  Anyone who has ever been to Disneyland could manage this cloister clutter. 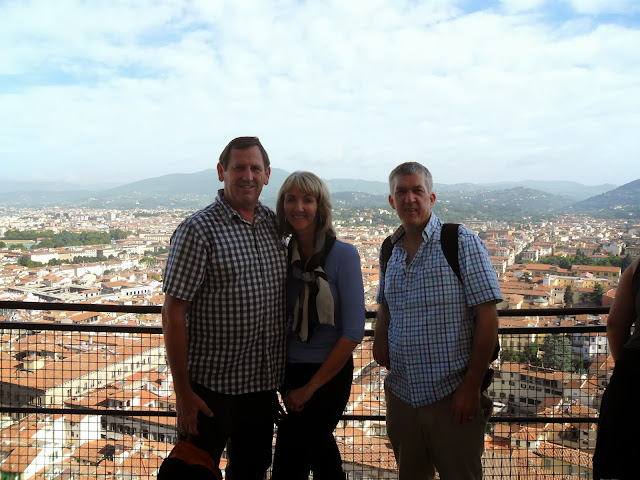 I was smiling, but I was really worrying about how I was going to get down without screaming and strangling someone.

The rotunda is fresco-ed with incredible figures, including horribly grotesque scenes of judgment and condemnation.  Because you have to crane your head back on your shoulders to take them in, your neck-ache will remind you for days that you have been suitably warned that you are going straight to hell. 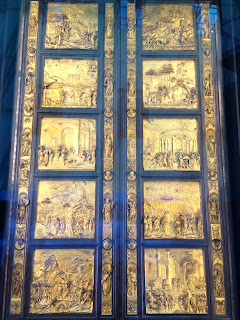 These beautiful gates to the baptistry, symbolic of baptism being an entrance into heaven were a balm.  Every scene tells a biblical story. They are massive, sealed behind heavy glass in a climate controlled case to preserve their beauty.  It was a life's work for Lorenzo Ghiberti, taking 21 years.  Michelangelo called them "The Gates of Paradise" 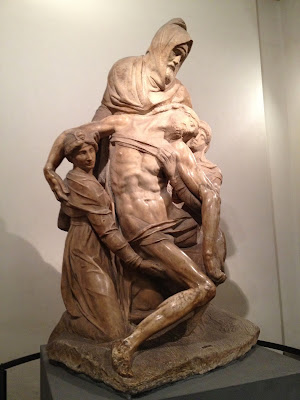 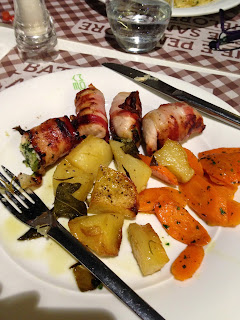 Dinner that night was on a charming side street where we watched men in beautiful suits and women in dangerous high heels totter over the cobblestones on their way to a nightspot.

A dreadlocked couple in contrived looking gypsy clothes took a table near us and then asked other diners for their leftovers.  I had none to give.
Posted by Unknown at 10:10 AM

Those narrow stairs look exactly the same as the ones in St. Mark's Basilica in Venice! You're making me miss Italy!

So beautiful. I want to go there. Real bad like.

I SO need to go there.

*sigh*
That's where I wished to go this year. It's been 30 years since the first time, and I see that the climb up the Duomo hasn't changed a bit!